I know Book 2 in the Poppy Denby Investigates series is only coming out next year, and Book 3, if the publisher likes it, the year after that, but we authors need to work in advance. In my research for book 3 which may very well be set in New York, I have found this spiffing photograph of a policeman measuring the length of women’s bathing suits in Washington DC in 1922. If Poppy and Delilah go to the beach on their Stateside jaunt this may very well happen to them 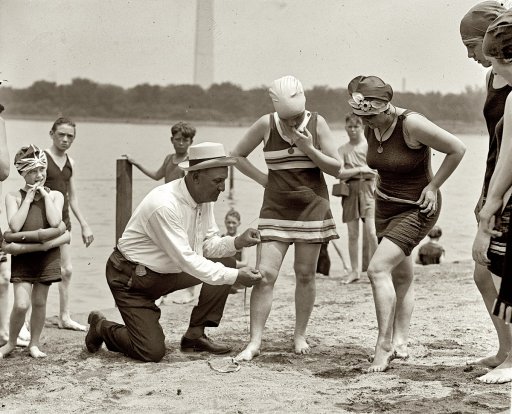 Here are some pics from a film shoot we did for a book trailer for The Jazz Files American launch. I’ll show you the finished film when it’s ready, but for now enjoy these stills of actress Amber Irish playing Poppy Denby as she arrives in London and starts investigating.

My author friend Anne Booth alerted me to this stunning little documentary film of London in the 1920s, shot by filmmaker Claude Friese-Green. As I watched it I imagined Poppy jumping on and off those open-air double-decker buses as she criss-crosses London trying to solve the mystery. Enjoy!

Everyone had a flapulous time at the launch party at Waterstones, Newcastle on the 25 September. Here is a taste of it. You might want to view the pics to the accompaniment of the Tiger Rag by the Original Dixieland Jazzband. At the launch it was played by Yussef Nimer and Jimmy Madrell from Middlesbrough, not Dixie

If you’re in the Newcastle area on Friday 25th at 7pm do come along to the launch party for The Jazz Files. Fiona will be sporting her best flapper frock and reading from the book. You’ll be entertained by the jazz duo The Hornblowers and you will be treated to a free glass of bubbly. 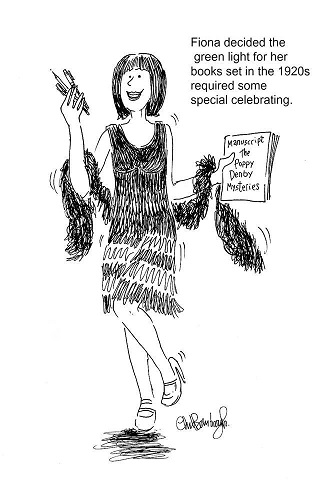 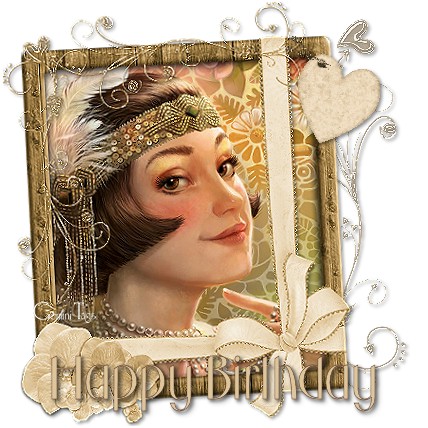 Today is the day we have all been waiting for: it’s Poppy Denby’s literary birthday! As from today, The Jazz Files will be available in and through bookshops – online and on the high street. If you have not pre-ordered your book already, friends in the UK can get their book today through:

Waterstones – even if it says it’s ‘coming soon’, that’s a website error: it is in stock!

In Australia you can order through Booktopia

In New Zealand from Fishpond

In South Africa you can pre-order the paperback from Takealot.com or get the e-book today from Amazon.co.uk (at least I hope you can. If not, you will have to wait until it becomes available in the USA – see below).

In USA – I’m so sorry my darlings, but it is only being released in the USA on 28 November! However, if you really can’t wait – and who would blame you if you couldn’t? – you can order from the UK Amazon site and have it shipped over. It’ll get there long before the 28 November! Amazon.co.uk

I do hope you enjoy getting to know Poppy and her world. Please come back and tell me if you do.

I have been asked why I called the first book in the series The Jazz Files? Some people have thought it’s a book about jazz music – which it isn’t; although jazz music most definitely features and would form part of the soundtrack if it was ever made into a film.

The term ‘jazz’ came from a type of black American music that emerged in the early part of the 20th Century. However, it also became a label for the whole sub-culture birthed from that music.

In the 1920s the term ‘jazz’ was used to describe anything that pushed the boundaries and was associated with popular culture as a whole – hence it became known as the Jazz Age. So yes, there was jazz music, but there was also jazz fashion, jazz hairstyles and jazz journalism. And that’s where, in this book, the term comes in. Jazz Journalism is a defined period in the history of the media that was at its zenith in the immediate post-war period 1919 – 1924. It was the successor of ‘yellow journalism’ and a pre-cursor for what today would be known as tabloid journalism. It was not a type of journalism that simply reported on jazz music.

In some quarters ‘tabloid journalism’ is synonymous with sleaze, but originally it was a form of journalism that sought to provide news and entertainment for the masses. It was marked by an interest in society and entertainment but also social activism. This duality is represented by The Daily Globe and Poppy has to walk the tight-rope between these two worlds and the moral dilemmas they present.

The term ‘Jazz Files’ is a made-up phrase. In the novel it is used to describe files kept by The Globe on celebrity gossip. Background information and interesting tit-bits are filed away for reference purposes for future stories. So in the Poppy Denby Investigates books whenever Poppy or one of the other journalists wants some background information on a story they are working on they ask the archivist, Ivan Molanov, to dig out the Jazz Files on so-and-so. The files are labelled for example “JF: E.Dorchester”. Which stands for Jazz File on Elizabeth Dorchester.

“It stands for Jazz Files,” said Rollo.“It’s what we call any story that has a whiff of high society scandal but can’t yet be proven… you never know when a skeleton in the closet might prove useful.”

Now if you want to know what’s in the Jazz File on Elizabeth Dorchester, you’ll have to read the book!

Fiona had a flapulous time (to quote a friend) at a publicity shoot. With only three weeks to go until publication, she thought she’d get into costume and into character. She made the dress (from an original 1920s pattern designed by a Mrs Depew) and borrowed the car, a beautiful 1928 Ford Pheaton owned by the very generous Alan and Christine Simpson of Crawcrook. 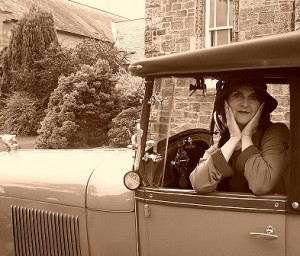 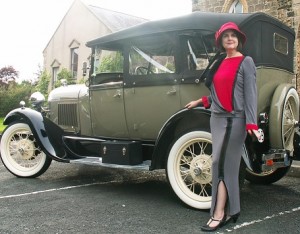 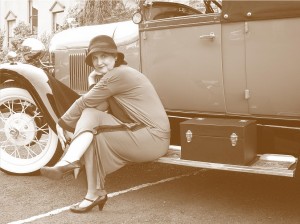