Although The Jazz Files is set in the summer of 1920 there is a backstory that goes all the way back to 1905. Poppy’s Aunt Dot is a member of the Women’s Social and Political Union and her involvement in the movement led to her ‘accident’ which left her in a wheelchair. Another suffragette dies mysteriously and Poppy’s investigations bring it all to light. 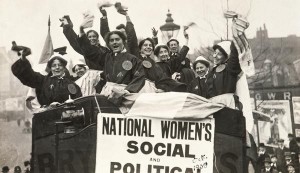 Hence the history of the suffrage movement in the United Kingdom is of particular importance to the book. Rather than repeat it all here, I will give you a basic timeline of key events and how they fit into the book. Here is a more detailed timeline of women’s suffrage up to modern times from the Manchester Metropolitan University, and see also the BBC suffragette archive for an overview of the movement including original film footage and various interviews including one with Sylvia Pankhurst.

1905 First arrests of suffragettes for disrupting a Liberal Party meeting. This is the year Aunt Dot first meets Maud Dorchester.

1906 Election of Liberal government. Four hundred of 650 MPs are in favour of women’s suffrage.

1907 Women’s Suffrage Bill introduced in March but runs out of time to become law. In The Jazz Files this is the year Maud Dorchester founds the Chelsea Six, the fictional militant cell of the WSPU.

1909 Liberals introduce a radical Suffrage Bill proposing women’s suffrage for some women and the vote for virtually all men. The Bill is passed in the Commons but then delayed by Parliamentary disputes over the People’s Budget. The Bill is dropped when a new election is called in 1909.

1910 In June an All Party Committee of MPs put forward a Conciliation Bill to give some women the vote. The Bill is passed by the House of Commons but then dropped when another election is called in November. Furious suffragettes step up their campaign of violence resulting in many clashes with police and arrests. On 18 November 1910, which becomes known as Black Friday, many women are injured outside parliament and one of them, Ellen Pitfield, dies of her injuries two years later. This is where the fictional Aunt Dot receives her injuries that leave her paralysed.

1911 Conciliation Bill reintroduced in May and passed with large majority. In November the Liberal PM Asquith changes his position. He decides to drop the Conciliation Bill and brings in a new measure to give more men the vote. He then indicates that MPs could add an amendment to give some women the vote.

1913 Government’s Male Suffrage Bill introduced. However, the Speaker of the House of Commons ruled that a Male Suffrage Bill could not also give votes to women. The amendment to give votes to women was withdrawn. Militant suffragette action became even more intense, including arson attacks and the destruction of the London to Glasgow telephone line.

On 8 June Emily Wilding Davison is crushed under the hooves of the King’s horse at the Epsom Derby as she apparently tries to throw a scarf with the WSPU colours around the horse’s neck. In The Jazz Files, Poppy Denby comes from Morpeth, the same town as Emily. In fact it was a visit to Emily Wilding Davison’s grave on the centenary of her death that gave me the idea to set a novel against a suffragette backdrop.

1913 Also sees the introduction of the ‘Cat and Mouse Act’, officially called the Prisoners (Temporary Discharge for ill-health) Act, which allows prison wardens to temporarily release suffragettes who have been on hunger strike and force-fed. The government fears the death of a suffragette in custody will cause public outrage. They were to be re-arrested after they had got their strength back. Emily Wilding is on temporary release under the Cat and Mouse Act when she makes her fatal protest at Epsom and in The Jazz Files Elizabeth Dorchester and Gloria Marconi are released under the same act.

1914 The Great War breaks out in August 1914. All women’s suffrage campaigners stop campaigning and support the war effort. Despite this, the NUWSS continues to represent women and to press for recognition of the work that women were doing, particularly in the munition factories. In The Jazz Files Mr Thompson’s daughter Vicky is one of these workers.

1918 Government passes a Representation of the People Act, which gives the vote to all men over 21. Some women also get the vote: women over 30, and women over 21 who are householders (own their house) or are married to householders.

1919 The Sex Disqaulification (Removal) Act opens the way for women to be able to have careers in the civil service, including the legal profession. In The Jazz Files I move this act forward to 1920 for plotting reasons.